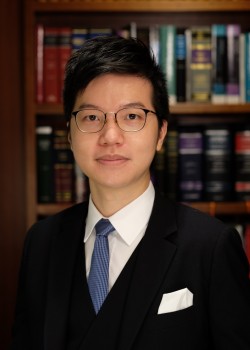 Brian joined Courtyard Chambers in 2020 after serving his pupillage with Mr. Charles J. Chan, Mr. Raymond Lau and Mr. Joe Chan. During his pupillage and private practice, Brian engaged in criminal cases (both for defence and prosecution) and civil cases (personal injuries, injunctions, debts and contractual issues, etc) at different stages, either as a sole advocate or or a led junior.

Brian accepts instructions in both civil and criminal law and he is developing a broad practice in all areas of Chambers' work.

Brian worked in the compliance department of multinational private banks before joining the Bar. He was responsible for monitoring the implementation of Anti-Money Laundering (AML), as well as ensuring the banks to comply with the requirements from regulatory bodies (e.g. HKMA, SFC).

Brian speaks fluent English, Cantonese and Mandarin and he is capable of providing written submissions and conducting hearings in both English and Chinese.

HCA 1860/2021: Appeared for the Plaintiff in a hearing for interlocutory injunction