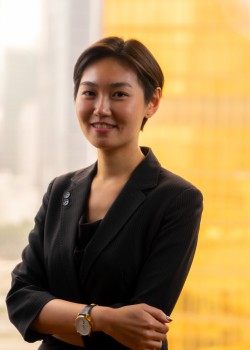 Holly has a mixed practice specialising in criminal law. She has appeared in her own right or as a led junior in all levels of court. She has a particular interest in commercial crime, medical, and construction matters. She also has a broad civil practice which includes obtaining and resisting injunctions, seeking anonymity orders and advising on construction contracts, personal injury, and defamation.

Holly’s first foray into the law was through a summer traineeship at the Legal Services Department of the Hong Kong Exchanges and Clearing Limited.  The first case she assisted on was a 114-day jury trial on conspiracy to defraud and money laundering with evidence being taken overseas. Her first case in full practice was HKSAR v Zhou Limei (2017) 20 HKCFAR 71 as a led junior where the conviction was quashed with retrial ordered.

Holly was called to the Bar in 2015 after completing her pupillage with Mr. Clive Grossman, S.C., Mr. Leo Remedios, Mr. Walker Sham, Mr. Douglas Kwok, and Mr. Benson Tsoi. She was the recipient of the Hong Kong Bar Association Charles Ching Memorial Scholarship in 2016, when she also served a mini-pupillage for three weeks at Doughty Street Chambers with Mr. Edward Fitzgerald, Q.C., and Mr. Tim Moloney, Q.C.

PCLL, The University of Hong Kong

[2020] HKCFI 2575: Appeal allowed with costs. Acting for the Appellant, inviting the Court to consider costs order regarding the Appellant formerly charged with knowingly making a false statement under section 25(1) of the Housing Ordinance.

[2020] HKCFA 15: Appeal allowed, Appellant released from custody. Led by Shahmim. K. Khattak and Anthony Lai, acting for the Appellant, inviting the Court to consider whether it was in the interests of justice to order a third trial in relation to a charge of trafficking in dangerous drugs.

[2019] HKDC 1417: Led by Shahmim. K. Khattak, successfully defended against a charge of causing death by dangerous driving. Dealing with the engagement of 3 medical experts and discussion on relevance of collision.

[2018] HKDC 66: Representing the defendant for mitigation for criminal intimidation, making child pornography, and unlawful sexual intercourse with discussion on the nature and interpretation of perceived threats and what constituted “revenge pornography”.

[2018] HKCFI 2167: Appeal successful on sentence; representing D2 on appeal with discussion on whether the offence of wilful obstruction, disturbance, interruption or annoyance of other persons in lawful use of a civic centre under the Civic Centres Regulation was an unconstitutional restriction of freedom of expression and right to lawful assembly.

(2017) 20 HKCFAR 71/[2017] 4 HKC 212: Appeal allowed, conviction quashed with retrial ordered.Led by Shahmim K. Khattak, acting for the Appellant, inviting the Court to consider the nature of equivocal admissions made by the accused.

ESS 39227-39230/2015: Led by Clive Grossman SC, representing the registered specialist contractor on whether the excavation and lateral support works conducted was carried out in such manner as was likely to cause the formation of a sinkhole which subsequently caused injury.